How to Control Scale Insects

How to Control Scale Insects 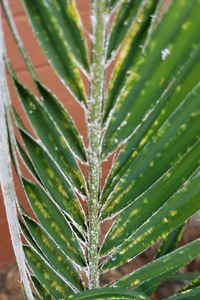 Visible scale insects on the plant stem and surrounding leaves

When you walk under that 16’ Ficus and your shoes stick to the carpet, like in an old movie theater, you have scale. When your Spathiphyllum looks like somebody has dribbled a can of soda over some of its leaves, you quite possibly have scale. When you see ants crawling up the trunk of your palm, you probably have scale. Scale insects are part of the world of interiorscapes and it’s your job to detect them, and control their populations to keep them from damaging the aesthetic appeal of the plants.

A bit about scale insects

There are two major families of scale insects that attack interior plants. The soft scales (Family Coccidae) and the armored scales (Family Diaspididae). Soft scales (these include brown soft scale, hemispherical scale and black scale) are 1/8” to 1/4” at their full adult size. They are about the size and shape of a common human mole. Scale can be found on the stems, branches and leaves of susceptible plants, such as Ficus, Spathiphyllum, Aspidistra, citrus and cactus. Soft scale produce abundant amounts of honeydew which is the sticky drips that you feel and see. Honeydew is actually excrement from the scale feeding on the plant.

Armored scales (these include oyster shell scale, San Jose scale and Greedy scale) are circular or oval hard bumps with no visible head or legs. They are about 1/8” in size, generally smaller than soft scales. The most pronounced difference is that they do not produce honeydew. Frequently, we see armored scale on Rhapis and Aspidistra. On Rhapis, it shows up as tiny white dots on the emerging new growth, especially from soil level. It scares the new growth with translucent dots. On Aspidistra, it shows up near soil level along the stems of the leaves. Look closely and wipe it off with baby wipes.

All types of scale protect themselves from temperature extremes by developing external shells. These shells are made from excreted layers of wax mixed with cast-off skins shed during their developmental stages. They have piercing and sucking mouths. If they are numerous, their feeding will weaken the plant, causing distortions in the leaves, loss of plant vigor and injury from their toxic saliva.

Fortunately, new approaches to pest control are now available. They use the Integrated Pest Management (IPM) approach of cultural, mechanical, biological and chemical.

Cultural approaches include reducing plant stresses by picking the right plant for the spot, proper irrigation, and monitoring temperature and humidity in the immediate environment.

Mechanical controls are effective. Mechanical approaches include: pruning off the worst infestations, cleaning off the honeydew with Brand X and getting rid of the ant populations.

Biological controls suppress pest populations by putting to use their own insect enemies to devour them. Try one of several species of parasitic wasps if you have a scale population large enough to sustain the predators.

“Hot spots” can be treated with chemical controls and with the use of soaps to keep the pest population below damaging levels. A favorite treatment for large Ficus with scale is ACECAP, a systemic insecticide implant that is labeled for interiorscape use.

Be persistent with your control methods and stick with your IPM program for gaining the upper hand with scales.